Sleep apnea is a common and serious sleep disorder that causes you to stop breathing during sleep. When you have sleep apnea, air stops flowing to your lungs for 10 seconds or longer. That is, you actually stop breathing. The airway repeatedly becomes blocked. This limits the amount of air that reaches your lungs. When this happens, you may snore loudly.

Sensing you have stopped breathing, a control centre in your brain triggers you to wake up. This is just for you to take enough breath. Then you fall back to sleep and the cycle begins again. In some people this can happen over 30 times every hour even though you may not remember waking up.

Obstructive sleep apnea occurs when the muscles in the back of the throat fail to keep the airway open, despite efforts to breathe. Many people have sleep apnea but may not even know it. In fact, sleep apnea affects more than three in 10 men and nearly two in 10 women. Therefore, it’s more common than you might think.

This is the most common type of sleep apnea. It occurs when air stops flowing to the lungs because of a blockage (or obstruction) either in the nose or throat. The upper airway could become blocked due to various reasons such as the soft tissue in the back of the throat relaxing during sleep. This blocks the airway often causing you to snore loudly.

This is a much less common type of sleep apnea. It involves the central nervous system. In some cases, the airway is actually open but air stops flowing to the lungs. It occurs when the brain fails to signal the muscles that control breathing. People with CSA don’t often snore, so the condition sometimes goes unnoticed.

This is a mixture of both obstructive sleep apnea OSA (where there is a blockage or obstruction in the upper airway) and CSA (where no effort is made to breathe).

If you have any concerns that you may have any type of sleep apnea, please consult your doctor.

Sleep apnea can affect anyone at any age, even children. There are a number of factors that increase your risk such as:

It can be tough to identify sleep apnea on your own. Because, symptoms only occur when you’re asleep. But you can get around this difficulty by asking a bed partner to observe your sleep habits. You can also record yourself whiles you sleep. If pauses occur while you snore, and if choking or gasping follows the pauses, these are signs that you have sleep apnea.

The most common symptom of sleep apnea is snoring. However, not everyone who snores has apnea. Snoring is likely to be a sign of sleep apnea when it is followed by silent breathing pauses and choking or gasping sounds. Most people with apnea often have daytime sleepiness or fatigue.

Common symptoms of sleep apnea include:

Remember, these symptoms may not always relate to apnea. So please discuss any concerns you may have with your doctor to ensure that an accurate diagnosis is made.

While a diagnosis of sleep apnea can be scary, it is a treatable condition. In fact, there are many steps you can take on your own to help, particularly for mild to moderate apnea. Home remedies and lifestyle modifications can go a long way in reducing apnea symptoms. However, they should not replace medical evaluation and treatment.

If your apnea is moderate to severe, or you’ve tried self-help strategies and lifestyle changes without success, a sleep doctor may help you find an effective treatment. Treatments for central and complex apnea usually include treating any underlying medical condition causing the apnea, such as a heart or neuromuscular disorder, and using supplemental oxygen and breathing devices while you sleep. 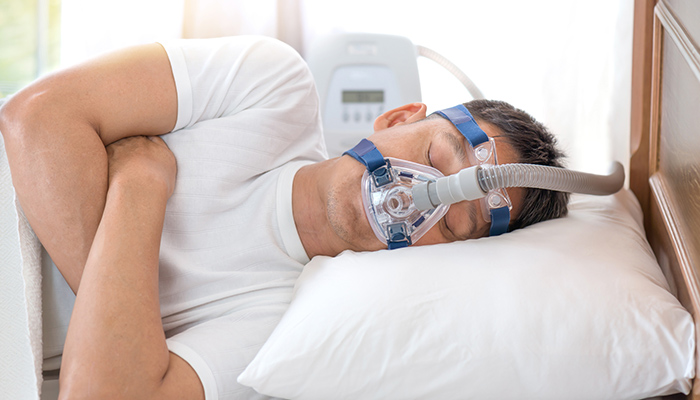 The treatment of choice for obstructive apnea is continuous positive airway pressure device (CPAP). CPAP is a mask that fits over the nose and/or mouth. It gently blows air into the airway to help keep it open during sleep. This method of treatment is highly effective. Using the CPAP as recommended by your doctor is very important.

Other treatment methods include:

Sleep on your side or abdomen rather than on your back

Sleeping on your back can cause your tongue and soft palate to rest against the back of your throat and block your airway.

People who are overweight have extra tissue in the back of their throat. It can fall down over the airway and block the flow of air into the lungs while they sleep. Even a small amount of weight loss can open up your throat and improve apnea symptoms.

Smoking contributes to sleep problems by increasing inflammation and fluid retention in your throat and upper airway.

Avoid caffeine and heavy meals within two hours of going to bed. This is especially before bedtime. Because they relax the muscles in the throat and interfere with breathing.

As well as helping you lose weight, regular exercise can have a major effect on the duration and quality of sleep. Aerobic and resistance training can help reduce symptoms. Yoga is also good for strengthening the muscles in your airways and improving breathing.

Sticking to a steady sleep schedule will help you relax and sleep better. Symptoms decrease when you get plenty of sleep.

If left untreated, the apnea can increase the risk of health problems, including:

Tweet
Share
Share
Pin
Share
6 Shares
About felclinic 593 Articles
Felix Ntifo is a Registered General Nurse who has so much passion to improve health care delivery. He founded FelClinic with the hope of making health information accessible to everyone who may not come in contact with him personally. "At felclinic.com we are very passionate about health and well-being of everyone. Our team is made up of professional doctors, nurses, midwives and lab technicians."